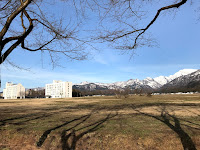 This year I moved from the UK back to Japan (for a 4th time) and started a new job at the International University of Japan in Niigata. It’s a really interesting uni, being entirely EMI by necessity as only 15% of the students are Japanese. Most of the 300 students come from East Asia, Central Asia and various parts of Africa. It is also surrounded by koshihikari rice fields, snakes and bears.
Last year I wrote about my thoughts on twitter. This year I have tried to be it off it less but it I’m not sure I have been all that successful. Twitter is still an awful form of communication. and probably the easiest way to fall out with someone who you would probably get on with in real life (or have previously gotten on well with in real life). Perhaps 2020 will be the year when I finally kick the habit?

This year I also wrote 10 blog posts, three book reviews and spoke at three conferences, ELTIreland, ExcitELT, and Nanzan langauge education seminar. I did not attend the big conferences this year because the price would have been almost half of my entire research fund. The conferences I did go to were all relatively small and two of them were 1 day events with very low fees to attend and interesting formats. I think there is something to be said for these kinds of smaller conferences with novel formats. I certainly got the chance to meet and talk to a lot of other teachers.
For example, I managed to finally meet people I had known for ages on twitter such as Formerly SwanDOS Rachel Fionda, Marjorie Rosenberg, Peter Lahiff, Lou McLaughlin, Liam Tyrell, Tim Hampson, Peter Brereton, Ted O’Neil,  Chris Farrell, and Darren Elliott (of lives of teaches fame). Apologies if I missed you out…I’m very forgetful! I also unfortunately missed the chance to meet Leo Selivan and Marek Kiczkowiak as I was passing through Liverpool. Maybe next year？

Here were the top 5 posts of this year by views.

the top 5 posts of all time haven’t really changed.

1. MA or DELTA?2. Does Swearing show a lack of IQ? 3. Skimming and scanning4. left brains and right brains in TEFL 5. Learning styles: facts and fictions

This year I also had a piece published in EFL magazine on Freire that generated a little bit of controversy. The piece was my personal reaction to a book that some claims is very important to the teaching profession.

It occurs to me, rather belatedly, that twitter has something of an amplifying and distorting effect. You can get the impression that ideas are really popular and important when really it’s just a twitter thing. A political party can seem really loved or a celebrity can seem reviled when in reality it’s just the impression twitter creates. I think this is probably true for critical pedagogy. In fact, the editor of one publication I sent the article to replied saying that though I made valid points the book was just not well-known or part of main stream teachers’ reading lists to be of interest to readers.

Likewise, one distinguished member of “TEFL royalty” told me, much to my surprise, that he had never heard of the book and similarly very few hands went up when J.J. Wilson reportedly asked teachers at a conference to raise their hands if they knew it. Writing about Freire then is a bit like writing about NLP. Most people will shrug but the fans will really come for you.

So I think I got sucked into spending time on something that isn’t really that important to most teachers and I’m probably done with the subject but to fans of critical pedagogy I ask the same question I ask everyone else on this blog, -where is your evidence that this stuff works?

And finally for this decade….EBEFL asks….is blogging over? Perhaps it’s how little time I spent on twitter or perhaps it’s who I follow or twitter’s algorithm but I can’t remember seeing that many new bloggers or blog posts going around this year. In contrast, everyone seems to have a podcast! So many in fact that I can no longer keep up with them all (though you can read reviews of some of them here, here and here) Is podcasting the new blogging?

Anyway, as always, thanks for reading and have a great 2020.